Your fat roll is killing you. OK, as a climber, and especially one who is reading an article about training, I’ll bet your body fat percentage is pretty low. On the flip side, though, you are reading an article about weight management. Chances are you’re holding the same weight you usually hold, and those stubborn last few centimeters under the harness waistbelt are not budging.

Most fully-addicted climbers cover about 90% of the distance between novice and their total genetic potential within about three years. Spend a couple more years working power, doing hangs, bouldering, whatever…the point is you’re just not going to get those huge gains again. If you’ve been in the game long enough, you know the cycle. Some years you send two or three hard things, some years you don’t. The problem is, “hard” has become a fixed point or grade for you, and you’ve been there too long.

Climbing well is about “relative strength” or strength-to-weight ratio. Consider this (very oversimplified) example: A climber that weighs 200 pounds can do one pull-up. We would say this climber’s relative strength in the pull-up is 100%. Now, if he gets a little stronger or a little lighter, this ratio can change. Let’s say he hangs some weight on a belt and can eventually do a pull-up with 20 extra pounds. His relative strength is now 110%.

Same thing if he loses weight. Let’s say he gets no stronger (just like me!) but loses some mass. By losing 10 pounds, his relative strength goes up by (about) 5%.

Relative strength is the top predictor of high performance climbing. The real problem is this: training can only take you so far. If you’re maxing out your training and your technique is top-notch, your only way forward is to get lighter. And by forward, I mean way forward. By reducing your weight by just 5%, you’re looking at increasing your economy in a way you’ve not seen since you started climbing. How’d you like to advance a grade next year? How about two grades?

As much as I love climbing and talking about training for climbing, it doesn’t pay for shit. The way I pay for food and a place to sleep is helping people get skinny. Needless to say, I pay really close attention to what works and what doesn’t work.

Where you’ve failed in the past, and where you’ll undoubtedly fail again is to try and get light while also getting stronger. Like chasing two rabbits at once, you’re bound to fail. So how do you set it up so you can lose those pounds and kill it next season?

A few big, important rules that we are going to follow:

Check out this study. Two groups of people were asked to eat either 1000 calories of nuts (protein and fat) each day or 1000 calories of candy (simple sugar). The remainder of their diet was not controlled. At the end of six weeks, the nut-eaters lost about 2.5 pounds each (1.1kg) where the candy-eaters gained around 4 pounds (1.8kg). This study, and several like it, help illustrate the hunger-producing effect of simple sugars and the satiating effect of fats and protein.

If you really want to lose, stick to vegetables, protein sources, and minimal amounts of fruits and even grains. Keep sugars and other “white” carbohydrates out. The grain and fruit thing varies, but for people who are really stuck, this can be a primary factor in losing weight. Remember, there are no essential grains.

Interval-style efforts are superior for two reasons. One, the duration of the workouts is shorter and usually results in a lesser hunger response when compared to long efforts. Second, high-intensity training has a profound effect (both acutely and chronically) on resting metabolic rate. By changing your RMR, you burn more calories all the time, not just when you’re exercising.

That being said, I’m not a huge fan of running or cycling for climbers. If you love those sports, fine. But don’t take them up as a weight-loss method only. There are better ways.

For our climbers really trying to lose those last few pounds, we try to limit the training to short, hard sessions and no non-specific training. I’ve seen plenty of anecdotal examples of someone running a bunch and getting skinny. I’m just saying that’s not the rule.

Nutrition is about 80% of the war on fat. Training helps, but is not the key. You’re never going to train hard enough to outpace a crap diet.

In the second part of this article, I will outline some specific weight-management plans, and talk about how one can maintain a “competition” weight without losing too much strength. 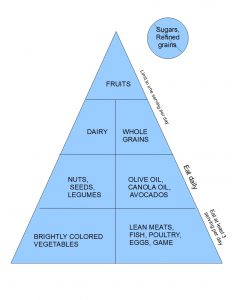