Movement is the basis of climbing up rocks, and in order to move, we need to supply our body with energy. Since any and all movement can occur at multiple speeds, in different directions, and over different durations, our bodies have evolved to handle supplying the energy for moving in several ways. In short, the body seeks to deliver Adenosine Triphosphate (ATP) – the body’s energy currency – to the muscles in order to keep them going, no matter what energy source is available at the time. Some ATP is created as needed, some is stored in areas outside the muscles, and some is stored in the muscle cells.

The Anaerobic Alactic System (AA), also called the creatine phosphate system, or the ATP-CP system, deals primarily with the quick supply of ATP for fast and powerful movements. Because it relies primarily on the little ATP that is already present in the muscles, supplies run out fairly quickly, and fast and powerful movement drops off after just a few seconds. You can test this with a simple all-out sprint test; go outside, sprint down the street at full speed, and note how your movement slows after 5-8 seconds. Even the fastest in the world will slow in the final meters of the 100M sprint. 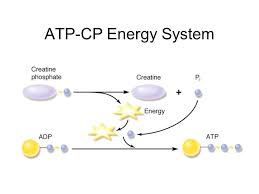 This energy system is never working at 100%, so there is always a little contribution coming in from “second gear”, the anaerobic lactic (AL) system, and “third gear”, the aerobic (Ae) system. When we look to improve the function of the alactic system, we have to look not only at improving its ability to create energy quickly, but its ability to work well with the other systems to increase its ability to keep reloading energy over long periods.

This is the simplest of the energy systems – thus the quick turnaround on energy – and is the most dependent on genetic factors…so it has the least room for improvement of any system.

The AA System in Practice

Not only does the Anaerobic Alactic system fuel your body’s highest-powered activities, it also creates very little fatigue due to the short duration that the system is your primary source of energy. Most of the pain and suffering we endure in training comes from operating in the next system up, the AL system. Try this and see for yourself: (I’m assuming you can do 5-10 pull-ups or maybe more for the purposes of this example.) Do two pull-ups, then rest for 45 seconds. Do two more. Rest 45. Repeat until you’ve done 15 rounds of this; 30 pull-ups in roughly 15 minutes. You won’t be tired. Or pumped. Or sore tomorrow. In a few days, I want you to go full-on to maybe 1-2 reps shy of your max…right about the time the reps get really hard and your form starts to go. Say you can do eight good ones…do 7. Rest 2-3 minutes, then do 7 again. Repeat this for 4-5 sets, or until you get roughly 30 pull-ups in about the same time as you did last time… except by doing 7s instead of 2s. The difference you feel is the difference between energy sources. Not only does the rest period matter, but the time you work matters, too. The more time you spend using AL energy, the more waste you build up, and the more tired you become. 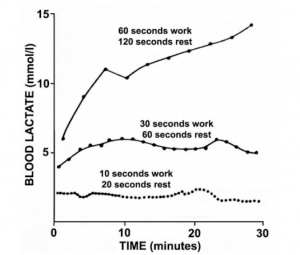 In climbing, the hardest parts of most climbs are really only a couple of moves long. When you are on a route, the alactic system is kicked in to high gear when you get to really small holds, big moves, or hard sequences. Once done, your body will default back to aerobic (3rd gear) metabolism as quickly as possible to recover and continue efficient power output. Therefore, the efficiency of your AA system depends highly on the efficiency of your Ae system, too..

Overall, climbing is most efficient (and fun) if it is primarily driven by these two energy systems. When we become too dependent on 2nd gear (the Anaerobic Lactic system / power endurance), the efforts become very painful and hard to recover from.

As I said above, this system is the least changeable of the three. Research shows that the most we can hope for is around 15-30% improvement through training. Since the system relies heavily on creatine phosphate to recharge the ATP stores, most of the work done in this system is carried out by “fast twitch” fibers, so our ability to bring more oxygen to the muscles is somewhat limited. Increases in alactic power come primarily from increases in enzyme concentrations in the muscles and associated tissues. Increases in alactic capacity are largely due to greater ATP and creatine phosphate concentrations in the muscle. This is the main reason people supplement with creatine, though the improvements from such supplementation are quite small.

In addition to the increases in power and capacity, we can see improvement in the economy of the system. To some degree, the muscles’ speed of contraction can be improved, and thus increase the system’s effectiveness and efficiency.

Improvements in alactic function are critical to sport performance, but you need to have a fair amount of discipline when it comes time to train, lest you end up seeking fatigue in the lactic “second gear.” Good programming will not only seek to improve your alactic function, but also try to improve the relationship between alactic and aerobic training. This is your “power at the crux” system: you know what trying hard feels like…so train that way.

To increase the power output of this system (go harder), you want to keep the exercise set length short (3-8 seconds) and the effort at 90% or above, with long / complete rests.

To increase your capacity, progress toward longer sessions at the high loads above, with efforts at 80% or harder. Longer total work time over a training cycle is key…so don’t shortcut this in favor of easier movement.

Before you jump into some kind of alactic-only training phase, remember that the interplay of training for pure strength and power as well as development of the aerobic capabilities of your muscles is critical. When exploring the ideas that follow on training this system, keep in mind that this will only represent a portion of your training during only specific parts of the training year. Below I have outlined some sessions we have built on alactic system development. In general, an athlete should do at least one session of alactic work per week to maintain her ability, and 3 or 4 per week to develop either more power or more capacity.

Same as above protocols, but switch between a continuous-load exercise such as rowing or Airbike, and a strength/power movement for 2-3 reps, such as pull-ups.

Best for building the Aerobic-Alactic relationship

Actual boulder problems fall outside the alactic zone, and can take up to 25 seconds to complete. To stay close to the zone we are trying to train we can use real boulders, but change the ratios.

12-25 boulders at 75-90% (at OS level or OS+1), one problem every 2 minutes. Gathering a pump means you are not resting enough between sets. Increase rest by 30 sec per set if this occurs.

One set of 3-4 reps at 85%+ strength (pull-up, squat, deadlift, press) followed immediately by a tempo-paced set of the same exercise at 40-50%. Tempo set is 10 reps at 4 seconds per rep, no pausing…each set is exactly 40 seconds. Rest 2-4 minutes, then repeat the pair 3 more times. 2-3 exercises per session.