Too frequently, we try to over-categorize our training. Long-time athletes and coaches learned about training for climbing by reading about and practicing training that came from other sports. We all understood that strength and power and endurance were different entities, some of us going so far as to train all of these different qualities at different times of the year or in discrete sessions.

Although most of our training is focused on the need for high levels of strength and stability in climbing, we understand that strength must be paired with skill, with capacity, and with power. Power is the primary physiological need of performance rock climbing. In sports-science terms, power is simply strength displayed with a speed component, or popularly viewed as strength x speed. Power is important in sports from heavy weightlifting to baseball, with all power movements falling somewhere along the force-velocity curve. 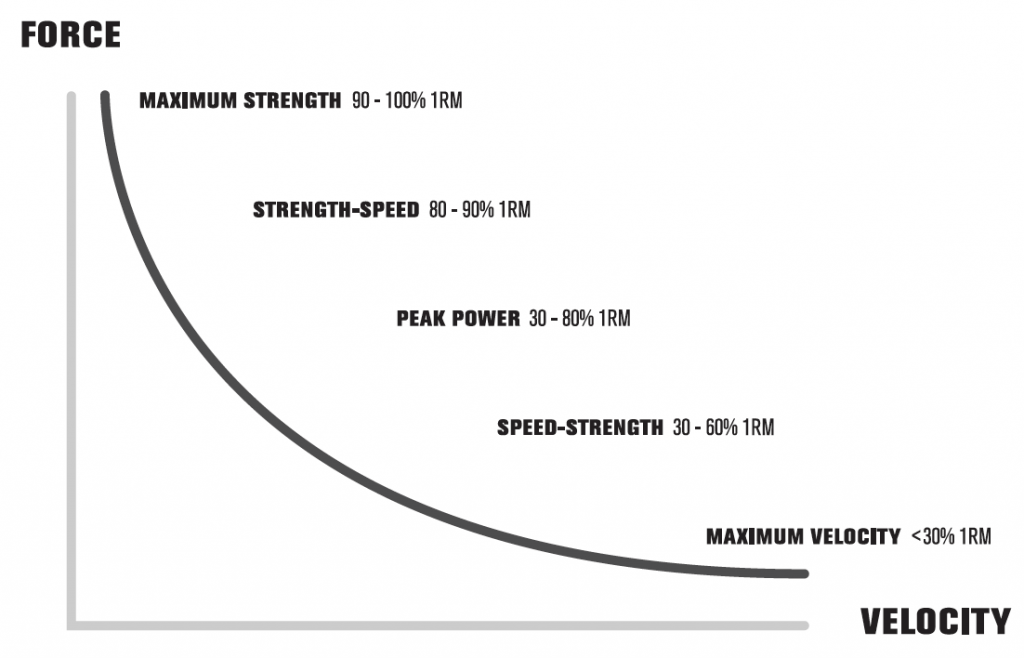 Simply put, you can demonstrate high force with lower speed (snatching a barbell) or lower force with higher speed (throwing a baseball). Most power use by climbers ends up being somewhere in between, in a zone called “peak power.”

Although power is a different animal than pure strength, both of them are used in conjunction in almost every move of a hard rock climb or boulder. We are now understanding that the two should not be trained separately. In fact, taking care to train them together more and more frequently as you get closer to performance phases of your training will make your gains come that much faster.

When designing a session that utilizes both strength and power, keep a few key points in mind:

Somehow, at some point, we decided that strength and power should be trained in separate phases in the training year. It was as if they were totally different entities that did not support – and rely – on each other in our movement. The main reason we separate training qualities is to avoid trying to improve two competing factors of fitness. There is good evidence that shows that a high volume of anaerobic endurance activity limits gains in strength. Hours of intense intervals can cause problems with gaining in anything else. In short, you can’t max everything all the time.

The biggest disruptions come with training different energy systems within the same workout. A quick review of our energy systems is below. I have developed the habit of referring to these as gears in a car, as the image is easy to remember, and the actual names of the systems are less important.

These three systems fuel all of our activity. Depending on the duration and intensity of the activity, one of them predominates, though all are being used at all times. Intensity of activity is the big factor. For the most part, you can ensure you are primarily using any system if you go at near-maximum effort for the durations listed above. If you walk slowly for 30 seconds, it’s not going to tap your second gear all that much, and you’re probably in the oxidative zone. This is important when it comes to assigning training efforts.

A quick story: A few years back, I was asked for a general strength program by a climber who lives in a different state. He trained primarily in a home gym, and was interested in adding some strength training to his bouldering and campusing routine. Being a fan of short, difficult sessions, I sent him the following:

4 sets of this circuit (rest 1-2 minutes between exercises):

4 sets of this circuit (rest 1-2 minutes between exercises):

I felt (and feel) this is a full-value session. A powerlifter might look at this and suggest the volume is too high and there are too many movements. My climber emailed the day after and said it was “too easy.” I was a bit shocked, especially since he hadn’t been training at all. On further digging, I saw that what he did and what I had intended were two very different sessions because I had not explained effort to him.

He did 3 bodyweight pull-ups (his max is around 15), 3 bodyweight squats, and 5 leg raises. I had expected him to increase the load until the assigned reps were just barely achievable… which is what anyone who works with weights for long figures out. He presses a pair of 15 pound dumbbells (the heaviest he had in the garage), and deadlifted 65 pounds, followed by some sit-ups.

Of course it was easy! The loads he used were not even enough for a good warm-up. Talk about crap coaching. Not only did he not get any benefit from the session, he was most likely not even using the energy system I had hoped he would.

If you get the intensity right, overloading the muscles in just a few repetitions or in just a few seconds, your body is stimulated to increase its ability to handle those loads next time. This is why the durations, such as doing only 3-5 sets, are so short…you’re just plain out of energy for that load for that particular day.

Loads close to max don’t necessarily mean you will get stronger faster. We strongly prefer the more conservative approach of training in the 70-85% of max range, where strength gains are still high, but injury risk drops precipitously. Our standard directions are to make it look easy (technically correct) and never miss a rep.

When we look at training plans focused on developing a particular quality, more and more of our work is aiming at developing capacities within specific energy systems rather than looking at single load parameters or speeds. This is why I feel climbers can effectively (more effectively?) train strength and power within the same training sessions, rather than in different months. If we know anything at this point in the climbing training era, it is that our training is all about managing compromise rather than finding some perfect balance.

In climbing movement, we use strength and power concurrently with almost every move. While we are statically holding a tiny crimp, a foot is stabbing explosively to a distant edge, while the arms contract slightly and the hips drive powerfully to position the body for the next move. Trying to separate all of these factors out into individual training phases is not only difficult, but foolish. Climbing performance is a marriage of high force, explosiveness, movement, and timing. These are all persistent fitness qualities (easy to maintain) that will degrade over time if ignored.

Training Strength and Power Together

Let’s say you want to develop explosiveness, concentric strength, isometric strength, core stability, and single-side strength. The needs list is huge, and it appears to be a life-long program from a distance. But if you simply break down the movement patterns and the strength qualities, you can start to create simple training cycles that can be executed year-round. Yes, it makes sense to do some jumping after a heavy leg set, but we can do the same in a full-range of patterns and qualities (terms defined at the end of the article), as follows:

All you need to do to build a wide-ranging strength and power session is to pick one from each category and build a workout from there. For example:

We have then covered several speeds of movements/types of contractions and 5 major movement patterns. After 6-8 sessions, switch to some different exercises and loads and keep after it. Don’t complicate it too much – remember we are simply training to support our specific practice (climbing), and are not looking to compete in some kind of weightlifting.

You can also take these same five qualities and apply them to climbing or finger-specific training, like this:

Clearly we are favoring isometrics here, but the take-home is that you don’t need to just stand in front of the hangboard for an hour and do the same sets and reps for everything and micro-manage load when, clearly, micro-managing load is both time consuming and maybe not that useful.

When it comes to getting better at climbing, we all know that there are a thousand little things we can each improve. The secret is to find where you are lacking the most and where you can make big gains. Cover the easy ground first, and then get into the nitty gritty once you have everything else dialled.

Bilateral – A strength exercise done using two limbs at the same time, such as a squat, pull-up, or 2-hand hang on an edge.

Unilateral – Single arm/leg training, such as lunging, 1-arm rows, single-arm hangs, and the like. These are great for increasing core involvement, improving balance, and increasing strength through the bilateral strength deficit phenomenon.

Explosive – These are powerful movements, often just a sped-up version of normal strength moves. A good rule of thumb – if you can do it slowly, it isn’t power, such as a box jump or a kettlebell swing.

Isometric – Static holding of a position, such as holding a 90 degree squat, or holding a 1-arm lockoff (while eating a donut).

Integrative – Movement involving two or more patterns at the same time. If you can’t easily say “this is an upper body pull,” chances are the movement is integrative. Examples would include front levers, Turkish get-ups, barbell cleans, and, of course, climbing.