Feel the burn. If you’ve ever worked to a pump that made you feel nauseous, sprinted so hard you had to lie down, or could taste the acid on your breath in a session, you know what maxing out the anaerobic lactic system feels like. In hard climbing, this is the system where we always end up right before we fail… and we make the mistake of trying to spend too much training time here because of it.

After the first few seconds of exercise, when the body pulls most of its needed ATP from the stores in the muscle, it begins to rely more heavily on the anaerobic lactic system. Under high-intensity situations, this system generally provides the majority of fuel for activities lasting from 10 seconds up to maybe 2 minutes. It has more power than the aerobic system, but is more expensive to maintain. After that circa 2 minute timeframe, we either have to slow down to levels we can sustain aerobically, or take a rest, and wait for our aerobic system to recharge the anaerobic systems.

The harder and longer you work in an intense set (or on a route), the more lactate will accumulate in your blood. For many years, sport scientists knew this and erroneously blamed lactate accumulation for fatigue. In reality, lactate is not the culprit for fatigue (hydrogen ions are) but it does serve as a useful marker for fatigue. The current thinking is that increased lactate might actually delay fatigue’s onset by helping maintain the electrochemical balance. (Let’s remember the black box here…it doesn’t really matter what’s going on in the body. It matters that we know how to improve the system by training. No matter what the explanation, the training is still going to work.)

Lactate works as a shuttle between the aerobic and anaerobic systems. It starts as a product of anaerobic energy production, but then gets used by muscles in other areas of the body during aerobic metabolism.

The balance between the anaerobic and aerobic systems is essentially just a tradeoff between capacity and power. We know that lactate accumulation increases as fatigue increases. We know, also, that the anaerobic lactic system’s high power comes at a cost, but don’t really know the nature of the fatigue it causes.

At some point, the system starts working so hard that it produces waste products and lactate faster than the body can clear them. This point is referred to as the anaerobic threshold. In our car analogy, we could view this as the redline on the tachometer. Too much holding this level, and the engine is going to blow. This threshold can vary day-to-day, depending on recovery, nutrition, stress, etc.

Climbers and boulderers cross and recross the anaerobic threshold time and time again in training and performance. Athletes like this can accumulate and transfer as much as 50% more lactate than untrained people, and will do so while reporting lower feelings of fatigue. Additionally, they will be able to generate more power under a similar level of reported fatigue. This is what we mean when we talk about anaerobic power and capacity. Greater capacity means you can sustain a high intensity longer. Greater power means you can do harder work at any given level of accumulation.

Through training, it is possible to sustain energy production via this system, but the total amount of energy is still minuscule compared to the aerobic system, and the amount you can improve is largely genetic. Because this is a relatively simple system, there are fewer ways to improve it, so spending an inordinate amount of time on lactic training is wasteful. 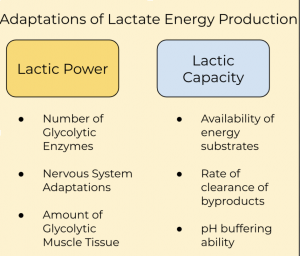 We can improve lactic power by increasing the amount of glycolytic (lactic) muscle tissue, improving the number of glycolytic enzymes, or by nervous system development. Lactic capacity is improved by increasing the availability of substrates, improving pH buffering ability, or by improving clearance of byproducts. Note that although all of these can be achieved through training the lactic system, many of them can be achieved by either training the alactic or aerobic systems, as well.

I wrote a whole book (Power Endurance, 2012) about this system and how to develop it. Although the sessions suggested in that book are still ones we use today, I advocated heavily for only training the lactic system, as I felt I was seeing good results. As noted above, the results I was seeing were getting me back “in-shape” for what I thought was a maximum level of fitness. It turns out that what I thought was my all-time limit wasn’t even close. The lactic system training I did built my anaerobic fitness to a high level, compared to my base fitness, but my base fitness (built by alactic and aerobic training) was relatively low. 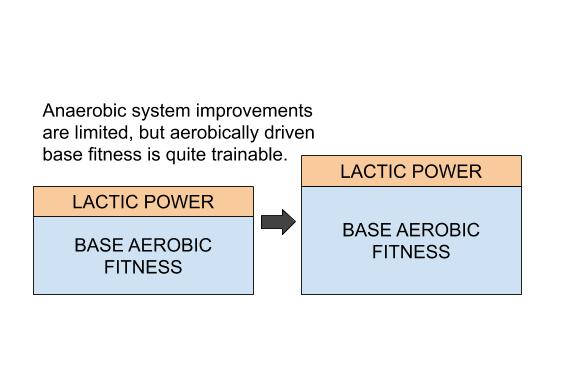 We can improve both Lactic Power and Lactic Capacity, but due to the fatiguing nature of the work, the training cycle can only last so long. A long phase of this type of training will result in both a decline in total training capacity, but also in a power decline. Thus we program a Lactic-focused phase only after a power-building phase, and just before a performance period.

In general, lactic training is achieved by doing medium-hard training with limited rest intervals. Instead of building our ability to avoid being pumped, we’re now working on handling climbing in a fatigued state.

This is a staple of hard power endurance training, and is especially attractive to climbers with a densely set wall or a bouldering-only gym. The beauty of this session is in its simple structure and its near-immediate feedback that the athlete has done something hard. As a coach, it can make you cringe to see your athlete slop through the last problems in a 4×4 session. Encourage good movement, focused breathing, and progress across a series of several sessions.

To start, pick 2-4 problems that are slightly below the climber’s onsight level. The climber will do four problems, either a combo of doing one problem four times, alternating between two problems, or doing four separate problems. They climb these back-to-back with no rest, then rest for a fixed amount of time. Somewhere in the realm of a 1:1 work to rest ratio is a good start, so 3-4 minutes is usually prescribed.

The athlete then repeats the same effort three more times at the same level of difficulty, always taking that same 3-4 minutes of rest between groups of four problems. If the performance really declines in the latter part of the session, reduce the overall difficulty of the problems.

This session is normally combined with other training, such as being tagged on to the end of some hard bouldering. If it’s done on its own, you can program two or even three full series (32 or 48 total problems), with 15-20 minute rests between series.

Boring but effective. This workout is done on a Campus Board with foot rails. The idea is to do a fixed amount of simple laddering – don’t worry about getting fancy here – to destroy the forearms’ local muscular endurance. The key is to give just enough recovery between sets that your athlete can have a usefully long session. If they pump out on the first set, your training effect will be almost nothing.

Warm-ups will feature some bouldering and a few minutes of movement prep. Some athletes benefit from 2-4 minutes of threshold-level work on the air bike or rowing machine to really get the blood flowing and the breathing up.

Pick a set of rungs that your climber can ladder up and down on for at least a minute when he’s fresh. This is a good place to start. If the rungs are too small…again the session duration becomes a problem.

A good starting point is to ladder for 30 seconds, then rest for 1 minute, repeating for 10 sets.

To advance, you can use one of the progressions below. Use only one per training block.

In the Two Problem Links session, we see a longer output of continuous climbing, so the athlete is working at the top end of the aerobic power zone. With this in mind, the climber can be very specific with hold type, angle, and difficulty of the problems. In general, you’ll start with a good bouldering warm-up that ends with some longer problems or shortened rests – with the goal being getting a slight endurance pump on. Have the athlete rest 4-6 minutes, then set up for the session.

The standard session is 4-8 sets of two linked problems. Select problems that are around your climber’s onsight grade or just slightly easier. You will have them climb problem one to its end, then downclimb on open holds, but avoid resting and taking too much time. Once back close to the bottom, they’ll traverse to the beginning of a second problem of roughly the same difficulty, then climb that problem to the top.

Most athletes will complete this set in 60-90 seconds. Aim to start with at least a 1:5 work:rest ratio, so if your set takes 90 seconds, have them rest about 8 minutes before the next set. If you see solid performance across all sets, you can increase the difficulty in the next session. Over the course of a training cycle, you can strip this rest down to probably a 1:2 work:rest ratio.